We have available the flags needed to  fill all your flag needs for the Flag the Technology World (Prevent Spraying Mishaps) BEFORE THEY HAPPEN!!!!!

FOR PRICING SEARCH UNDER THE TILE/FIELD MARKERS TAB!!!!!

We have available in most any size you would like , our 12" X 18" Pennant Flag is very Popular 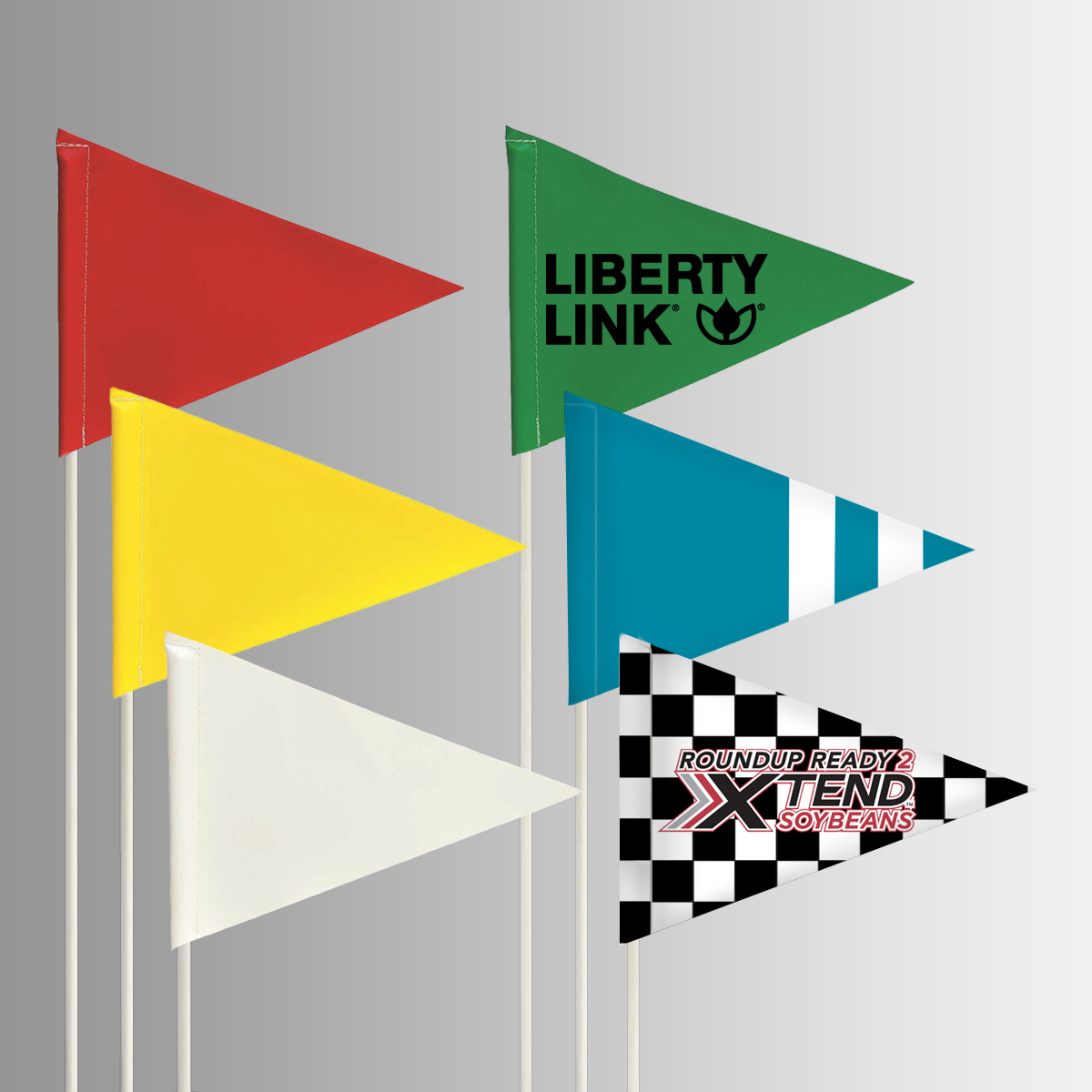 White-represents Roundup Ready Technology that is tolerant to glyphosate herbicide.

Bright Green-Indicates the Liberty Link technology. This technology is tolerant to glufosinate (Liberty)herbicide

Teal-indicates tolerance to both 2,4-D and FOP (Accase) herbicides or the Enlist technology. For Enlist cotton and soybean fields, a green flag should be added to denote tolerance to glifosinate (Liberty).

Black-indicates tolerance to dicamba herbicide or Xtend. The black and white checks indicate tolerance to both dicamba and glyphosate (Roundup). A green flag should be added for cotton to denote glufosinate (Liberty) Tolerance.

Flag the Technology is a field marking program originally developed by personnel at the University of Arkansas and is now a widely accepted
practice to reduce the risk of a misapplication. This practice will also make the applicator aware of sensitive crops adjacent to the field being
sprayed. Recent herbicide tolerant crop introductions have provided new options for controlling herbicide resistant weeds. However, the herbicides
used in these programs can have detrimental effects on non-tolerant crops. To minimize misapplications,  marking fields with designated color
flags representing the herbicide tolerant trait(s) has become a beneficial practice. Flags should be placed in a location clearly visible to applicators
upon entry into the field, or GPS coordinates.
Since the color of the flag represents a specific trait technology, multiple flags may be placed in a field where stacked technologies are used, such
as those possessing both Liberty Link and Roundup Ready traits. The objective of the Flag the Technology program is to help reduce herbicide
application errors, improve herbicide and technology stewardship, and foster good community relations.

To Prevent spraying accidents from happening these flags were designed to aid the Aerial Applicators, local farm chemical and fertilizer companies and local farmers.

In One States Testing Aerial operators were given a copy of this visual key and the growers had placed a couple of appropriate flags at the edge of their fields on the approach vector at planting to aid in preventing spraying mistakes.

The result: Aerial applicators got one final check before they started to spray… just in case. In 2014 the innovative people behind this concept reported that it prevented countless acres of accidentally-damaged crops. Several (honest) aerial operators admitted to pulling up just before they started to spray because they realized there was a mismatch between what was in their tank and what the field was supposed to receive.